Click on the magnifying glass icon on the photo to view bigger photo.

Utility 20′ and Over. Larger utilities have the advantage of more seating capacity as well as the ability to handle rougher water. They are usually equipped with larger engines to accommodate the extra weight and often have a middle seat. They can seat as many a 9 people. Large utilities are less common than small utilities and were typically more deluxe than their smaller counterparts. They are very popular and often command higher prices. 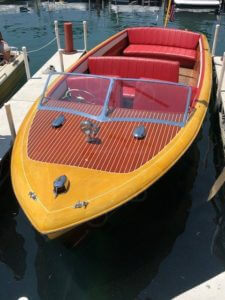