Click on the magnifying glass icon on the photo to view bigger photo. 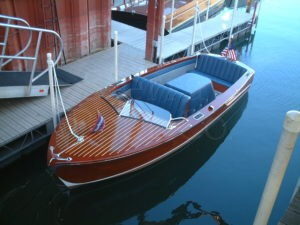 Utility, like the name implies, the utility type boat has more usable space and is more versatile than a comparably sized runabout type boat. The reason is an open floor plan, usually consisting of a front bench seat, the engine under a box and a bench seat in the rear. Larger models may have a middle seat as well. They are easy to get around in and have floor space to stow, skis, ice chests, dogs etc. Think of it a a family station wagon. with a proper power, they are also suitable for watersports, including water skiing and wakeboarding.